A person would need to be fairly familiar with the players and authors who have associated themselves with A Course in Miracles to recognize, however slightly, any of the names mentioned above. However, within the insular world of self-identified Course students, they are each well known. There has been a fair amount of history between Perry and Wapnick. History of the unpleasant political in-fighting and litigation type. The Perry camp and the Wapnick camp each have its die-hard supporters, and there are several other Course camps in addition to these two.

Free market ego competition at it's best? Worst? I don't know. It is what it is.

What these two competing camps have in common is the view that their respective understandings of what A Course in Miracles really means is superior to the other.

This book, One Course, Two Visions, does a good job of itemizing the specific areas of disagreement between Perry and Wapnick. For a beginner who is overwhelmed and intimidated by the prospect of actually studying the Course itself, this book might be a good introduction. Not only does the book cover a lot of ground in a summary way, its entire premise is an excellent reminder that there are many different ways to interpret the Course. Those who say differently ought be regarded with skepticism.

Navigating A Course In Miracles

A Course in Miracles is without doubt the greatest self-contained work on practical esoteric Christian mysticism of the 20th Century to first appear in the English language. Its influence is rivaled only by the collected writings associated with the teachings of G. I. Gurdjieff from the first half of the last Century, but most of those works are available to English speakers only in translation. A notable exception is Maurice Nicoll's collected works published in Psychological Commentaries On the Teachings of Gurdjieff and Ouspensky.

A Course in Miracles (ACIM) was originally published in multiple separately bound volumes. The first limited commercial printing of the Course was in four paper-bound volumes, known as the Criswell edition, in 1975. The next commercial printing in 1976 consisted of three hardbound volumes, in alignment with the principal divisions of the work into an explanatory and largely theoretical Text, the practical implementation of the ideas through daily spiritual exercises in the Workbook for Students, and a third smaller treatise called the Manual for Teachers.

For this reason, among others, numerous authors have published many books attempting to explain the material in a less onerous fashion. Many people are drawn to the secondary explanations at the expense of neglecting the original.

This is understandable. Every book written about A Course in Miracles is easier to read than is A Course in Miracles itself. The general idea, I suppose, is to first gain a simplified grasp of the material before undertaking the difficult job of studying the original. But, there is considerable risk involved by proceeding in this way.

First, it has happened that erroneous ideas about the teaching of A Course in Miracles are accepted and take root in the mind of the student in a way that is difficult to dislodge.

Second, the student never actually gets around to the study of the Course itself.

This is not to suggest the many and varied books about A Course in Miracles lack value. This is not the case, but their value lies in supplementing a student's study of the Course. Care must be taken to avoid using the secondary materials as substitutes for the original.

Reading the original material is categorically different from reading second-hand interpretations and opinions. It is different is a way that cannot be easily explained.

The intricate and sometimes seemingly convoluted connections among all the various ideas contained within A Course in Miracles cannot be expressed explicitly, but they must be discovered through experience, practice, and effort. The fewer the filters injected between the original and the student, the greater is the possibility for latent learning.

Each student reads the Course selectively, in the same way most people read a newspaper. Some items attract one person's attention, but are ignored  by others. Certain passages can remain quite invisible for a long time, until the reader is ready to see them. If one reads for oneself with the guidance of spirit, one is more likely to be drawn to the parts that the reader needs to see. Sometimes, just flipping the book open to a random page can produce surprising and miraculous results.

A Course In Miracles 1975 Criswell Edition

In the summer of 1975 Judy Scutch had a small number of reduced photo offset reproductions of the edited  A Course In Miracles manuscript printed and bound as paperbacks. Because of the large size of the material, it was necessary to divide it into four separate bound volumes. A total of three hundred four-volume sets were printed that summer in 1975, in three separate printings of one hundred sets each. These have come to be known as the Criswell Edition, after the name of the printer. At least two complete sets of the Criswell survive today. Until recently, I owned one of these sets, but that is now held by the Course In Miracles Society (CIMS). a non-profit organization located in Nebraska. The other set has been owned by Stephen Horrillo. You can see photos of his set here. 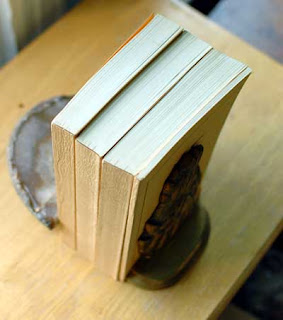 The process of printing the Criswell Edition involved photographing each page of the typewritten manuscript and reducing the size from the original 8.5 in. x 11 in. U.S. letter size to the 5.25 in. x 8.25 in. size of the finished books.


The pages that were published in the Criswell looked exactly like the typewritten manuscript, but smaller. 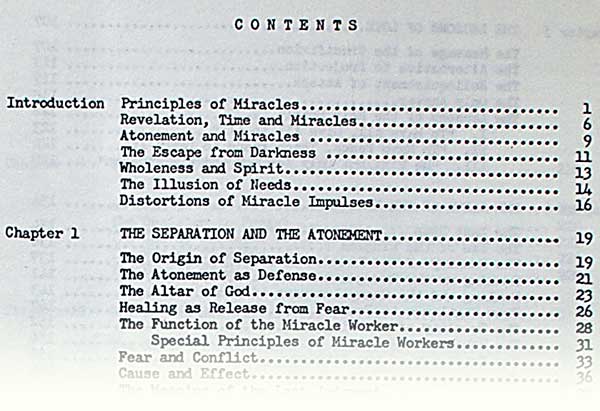 As you can see, this contents page for the ACIM Text was printed from a photograph of a typewritten page. You can also see that the printing on the reverse side show through. This is indicative of thin, inexpensive and pulpy paper. This is not a criticism of the product, since inexpensive was the objective, so much as it is a  factor in evaluating the scarcity of surviving examples of the Criswell. Thin, cheap and pulpy paper deteriorates faster that more expensive acid-free paper and it is more easily damaged by use. You can tell by looking at the pictures of the Criswell set shown above that these books were never read or used. The spines are not broken, there are no loose or missing pages, the corners are not bent or rounded, there are no marks or writing on the pages and there are no creases in the covers. This set is pristine and rare, but by all the appearances that can be extracted by examining photographs, so is the other set.

At least two sets of the Criswell have survived and they each appear to have never been read. This may explain why they have each survived into the 21st Century in such good condition. If the original owners had used the volumes for any serious study, the books would have likely fallen apart fairly quickly. The spines would have been broken and the pages would have started to wear at the corners and fall out.

Here are the two set shown side-by-side. The difference in the colors of the covers does not mean anything. The only way to know if the two sets have the same color covers or different color covers is to have both sets in the same room under the same lighting condition at the same time, and viewed with the same pair of eyeballs. 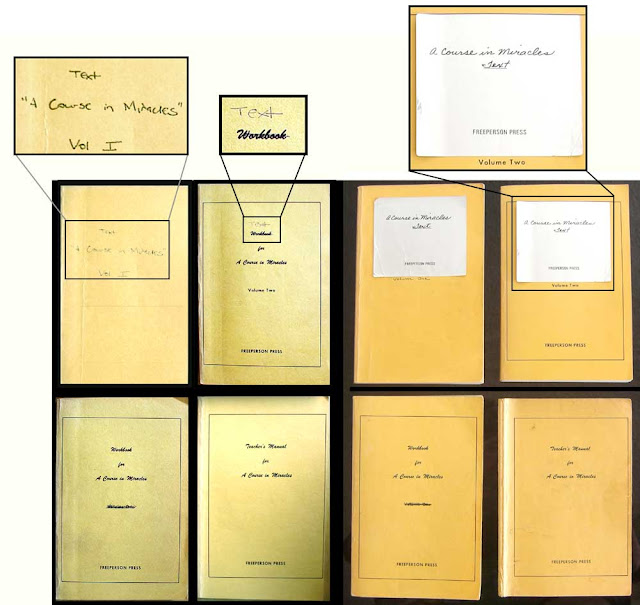 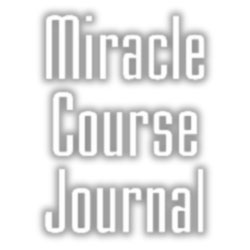 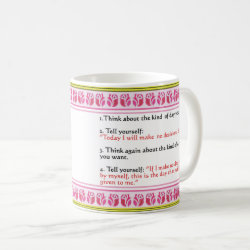 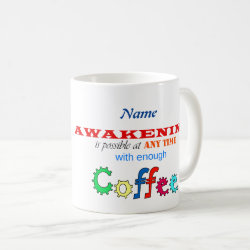